Beskrivelse fra Solid Tech:
The Discs of Silence the world’s second best passive isolator?
88,48% reduction at 20Hz!
The Discs of Silence is our workhorse isolator as in its Heavy- Duty version can effectively isolate up to 175kg (385lbs) per set of four discs.
When we developed the Discs of Silence was our goal to create the most efficient and load capable isolator as possible without taking too much height in claims. It would also be height -adjustable and be adaptable to uneven loads.

Enter the Discs of Silence!

The Discs of Silence isolation-system consists of a cylindrically formed, sturdy and anodised Aluminum base, extension-springs, center-hub and a height-adjustable center-screw with a damping layer for mechanical coupling to the component.
The Discs of Silence are available in 3 or 4pack.

The equally simple as ingenious horizontal location of the extension-springs allows a large capacity without taking as much height in claims. When correctly loaded the operating height is 32-35mm. Correctly adapted and loaded is the resonance frequency well below 4Hz. Ensuring isolation even in the lowest and most degrading frequencies, resulting in much higher fidelity without tonal highlighting and masking such as more dynamic, cleaner transient response, wider and deeper soundstage, increased low level information, tighter bass and silkier highs.

Optimized adaptation to a specific weight of each disc is obtained by adding the right number of springs, as well as the height adjustment of the center-screw.
Each disc can be configured with two, three, four or six springs depending of the amount of load. In the case of supply are three springs mounted and included and then the system can be loaded with max 45 kg when the center screw is adjusted to its top position. Additional spring-set can be obtained and then doubled the capacity to 90 kg per set of four discs. In the case of supply of the HD version are twelve springs per disc included but only six mounted.

Pure technology – No voodoo. The proof is below, 88,48% reduction at 20Hz. Have you ever seen an independently conducted vibration measurement from any other audio-isolator manufacturer? 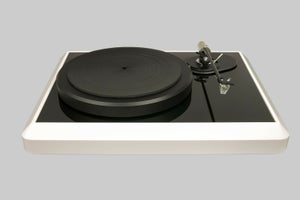 Højttaler, Andet mærke, Fink Team KIM, passiv, Perfekt, “Finks KIM is an incredibly well-balanced, perfectly supple loudspeaker that plays coherently and coherently from front to back. Certainly, one of the best there is in this class.” - LP Magazine “KIM’s infectious well-timed musicality takes sound reproduction beyond mere process, to achieve a higher level of listener involvement and satisfaction.” - HiFi Critic Læs de MANGE fremragende anmeldelser her: https://www.finkteam.com/kim-reviews/ Læs mere om KIM her: https://www.finkteam.com/products/kim/ Kom og få en demonstration af denne nyeste højtaler fra Fink Team! Our latest design, and even if we say it ourselves the one of which we are most proud. KIM is a small loudspeaker and takes up far less room space than previous models, but KIM delivers music, emotion and scale in a way that’s surprising for its size. Defining a new model for a relatively new company in the marketplace is always challenging. With Borg, we made our second model a success by combining innovation and more of the same. For our third model, KIM, we asked our dealers and distributors, and they asked for either a more expensive model or a lower-priced model, but there was no clear trend. So, we did what we are good at – we made it our way again – a mixture of innovation and more of the same. KIM had to be a speaker that we would use ourselves, something fun. We designed another speaker for us. Borg is and always was a statement speaker. Bold and visible, never trying to hide and with as little compromise as possible. So how could a new model be different? Importantly, could it include Borg innovations? How could we reach a retail price which makes the speaker available for more people without losing quality? A few basic design principles stayed the same. A reflex system with a paper coned woofer with a massive magnet, Two-way construction with AMT HF unit, again based on a Mundorf core. A cabinet with everything needed to avoid unwanted radiation from the box and a highly optimised crossover with high-quality parts. We wanted an enclosure large enough to deliver realistic low frequencies and scale but was small enough to be relatively discreet. It had to be low enough to sit below windows and work well close to walls. Frequency Response 35Hz-25kHz -10dB, 45Hz-23kHz -10dB Average Impedance > 8 Ohm Minimum Impedance 5,9 Ohm @ 160 Hz Sensitivity 86 dB @ 2.83 V / 1 m Distortion 0.2 % THD @1W Crossover Frequency 2200 Hz Bass Unit High-Power 8“, 38 mm voice coil diameter HF Unit 110 mm AMT Dimensions 854 x 300 x 310 mm (HWD) Depth 412 mm with stand Weight 25,1 kg Finish Choice of several standard finishes Cabinet Reflex with multiple Strunk Absorbers and damped double layer Sandwich panels with one dimensional bracing and CleanPort resonator. Integrated Stand Option Switches 3 Positions Tweeter level, 3 positions Woofer damping Terminal High Current Single Wiring pure Copper
88.000 kr.

Pladespiller, Andet, Soulines Satie DCX, Perfekt, Soulines Satie DCX er den mindste pladespiller fra Soulines! Kontakt os for en demonstration i vort showroom eller endnu bedre - hjemme hos dig! Pris for værk alene! Soulines: www.soulines.com Beskrivelse fra Soulines: Idea to design a simple but versatile, compact but elegant, high performance yet affordable turntable, resulted in form of the Satie DCX turntable. Inspiration was found in the music of Eric Satie, stripped of any pretentiousness and sentimentality, thereby revealing an austere essence. Like Satie's music, the Satie DCX is striped to the bare essence, concentrating on the design and the execution of the performance wise most critical turntable parts; highly rigid aluminum sub-plinth supporting substantial main bearing with the massive platter and arm board(s) accepting almost every kind of the 9" tone-arm available today and minimal skeletal-like main chassis bearing electronically controlled DC motor. Mass distribution is carefully calculated, placing the Center of mass on the central vertical axe of the main bearing, in the sub-plinth horizontal plane. Further on, the dimensions, shape and arrangement of different openings/holes of the aluminum sub-plinth were optimized employing Golden Ratio and Fibonacci sequence, thus gaining uniform vibration damping and the reduction of the Moment of inertia in all three planes (along all three axes) to the Center of mass. Even though stripped to the bare essence, turntable wise, the Satie DCX provide an outstanding performance in compact and extremely user friendly package. Main plinth is made from the three 20mm thick layers of MDF bonded together and coated in durable graphite gray color, containing fine aluminum dust participles improving damping. Main chassis is supported by two silicone rubber grommets. Wing shaped, one piece sub-plinth is machined from solid aluminum, and it is 4-point coupled to the main plinth by means of rubber-cork washers of different dimensions and diameters, providing a good vibration and damping control. The sub-plinth is designed to accept any 9" tone-arm utilizing SME mounting scheme standard, and additional, user exchangeable Acrylic arm boards for Jelco/Linn and Rega/Origin Live/Audio Note type arms are included, thus almost any user desirable 9" tone arm available today could be mount on. Our recommendation is to use at least Rega RB202/RB303 or Jelco 250 series tone-arms, and when/if upgraded needed in form of higher quality tone-arm, the Satie DCX is ready. The massive third leg, a big adjustable cone machined from solid aluminum provide leveling and support the sub-plinth, yet it is 3-point coupled to the sub-plinth by means of rubber-cork washers of different dimensions and diameters, stopping any adverse outer vibrations to reach the sub-plinth and to disturb the delicate system of bearing/platter/record - cartridge - tone-arm. The drive system is built around the same high quality DC motor used in our more advanced models, electronically controlled, providing an easy operation and fine speed(s) adjustment feature. Speed changing and start/stop function are simple, just flipping the on/off and 33/45 switches. The platter, 30mm thick and weighing 2.6kg is machined from Acrylic to very high accuracy and together with the massive inverted main bearing employing Derlin trust plate (same like in our more advanced models) ensures good speed stability. The use of mat is completely up to the user preferences, thankfully to the 1.0mm deep recess carved into the top plane of the platter in the middle (for the record paper label) and to the fact that Acrylic proved itself as a great turntable mat "material". Included in the package: - two different (user) exchangeable Acrylic made arm-boards for 9" tone-arms: - Rega/Origin Live arm-board - tone-arm pivot to spindle distance 222mm - Jelco arm-board - tone-arm pivot to spindle distance 214mm - Acrylic (Perspex) dust
12.995 kr.