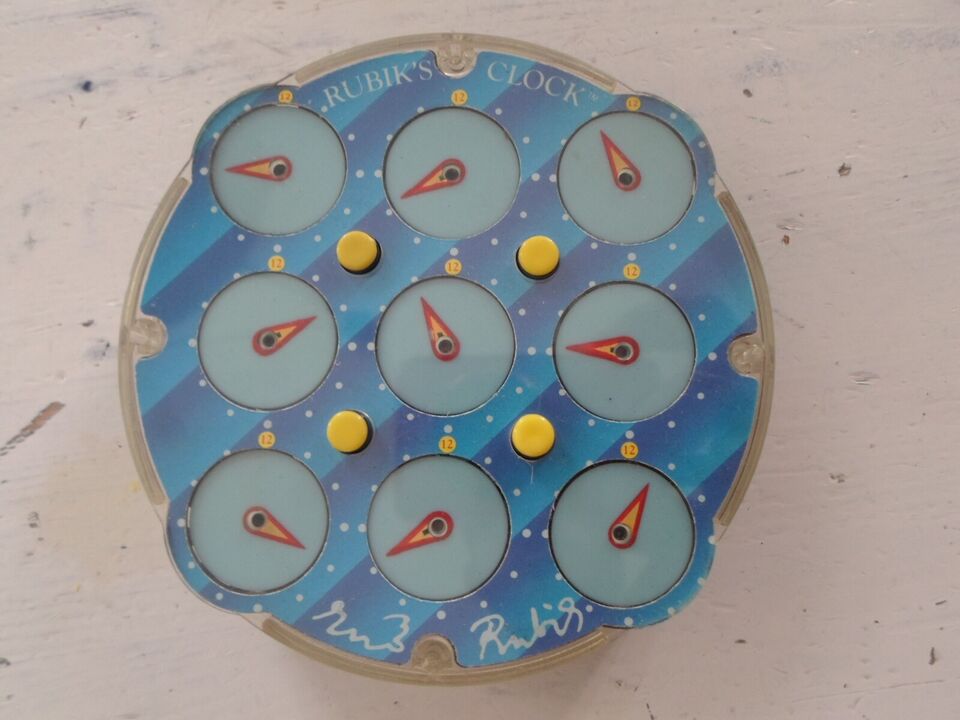 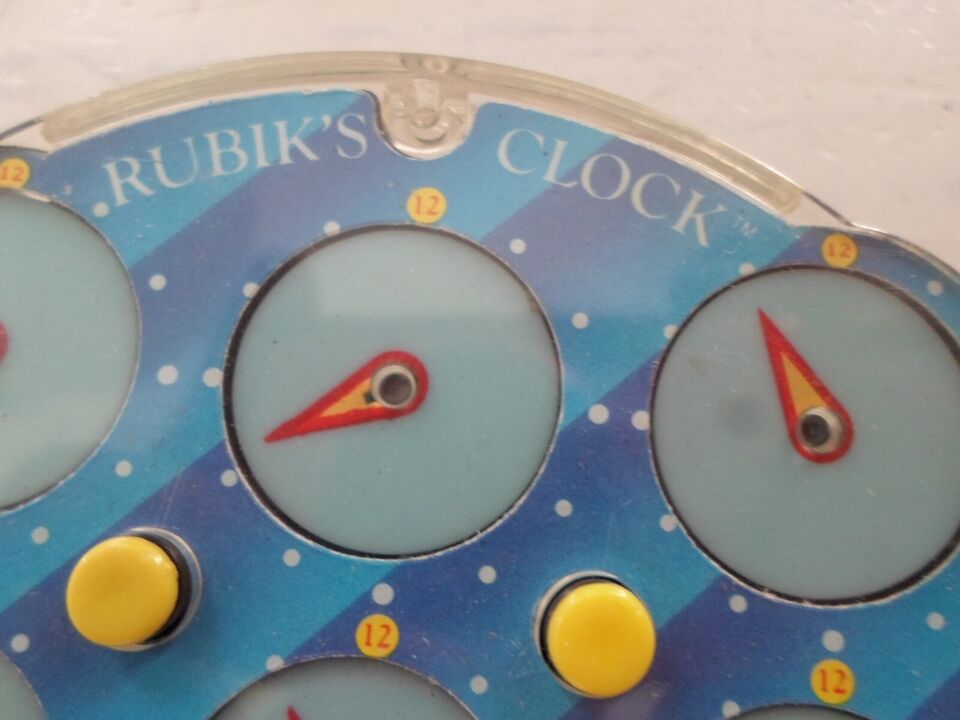 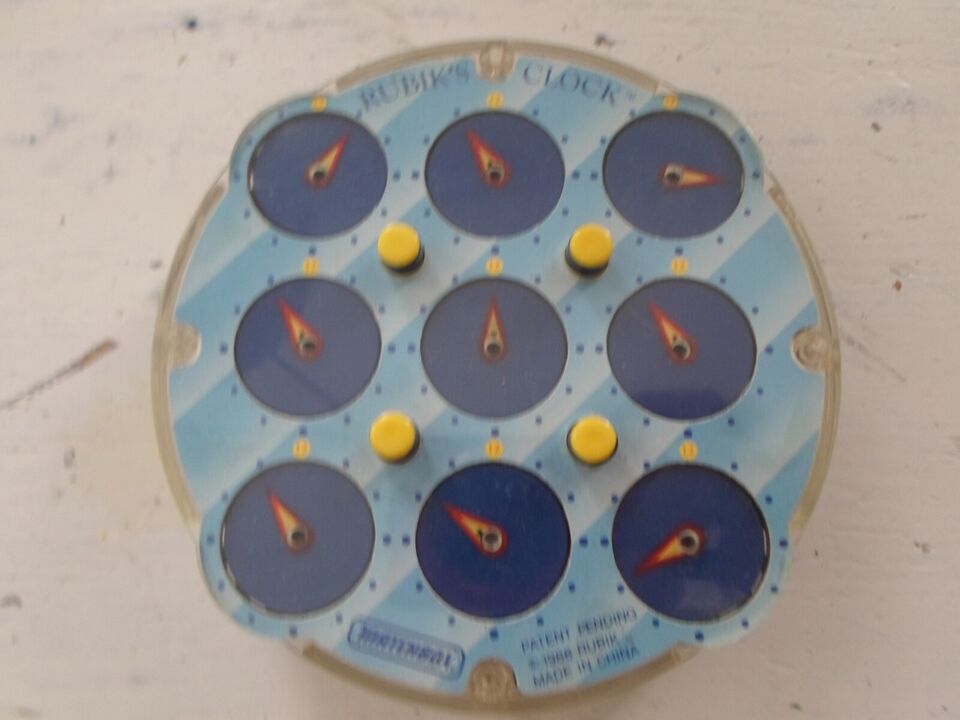 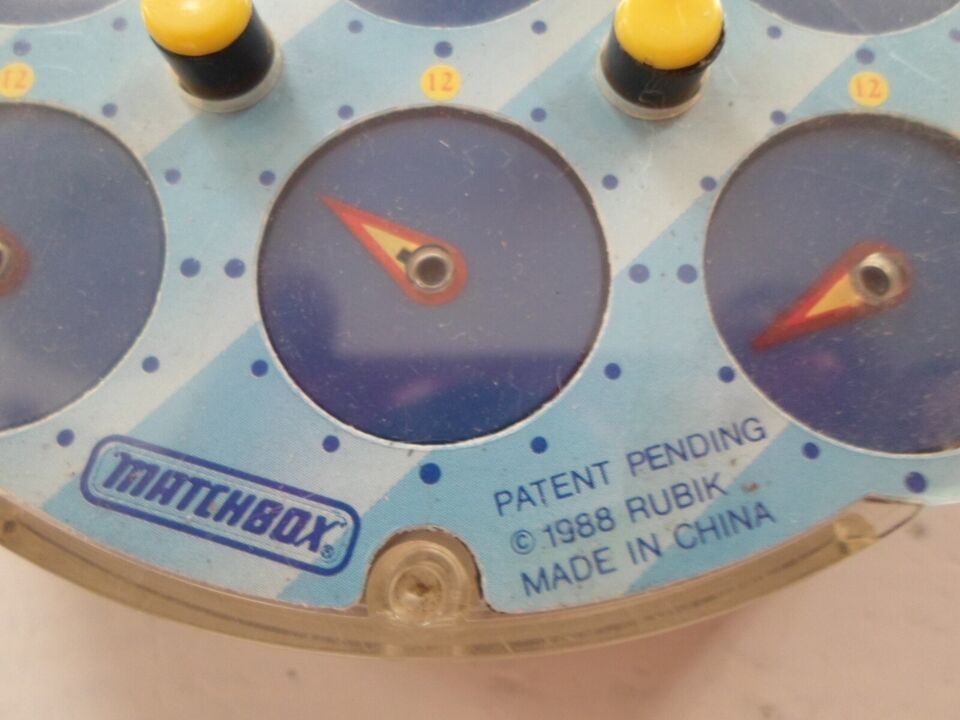 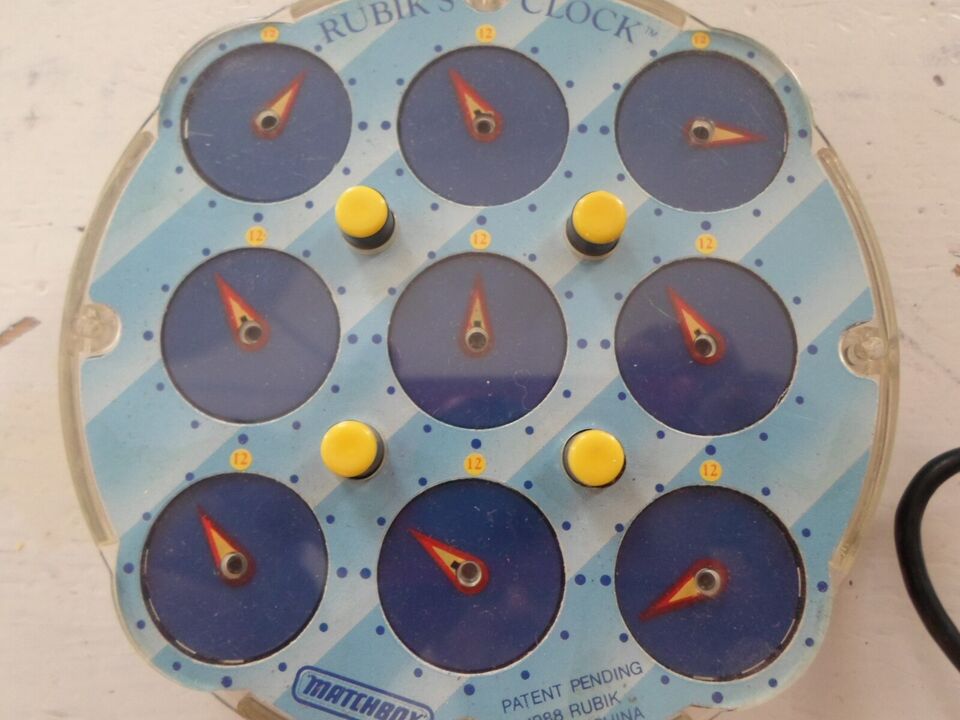 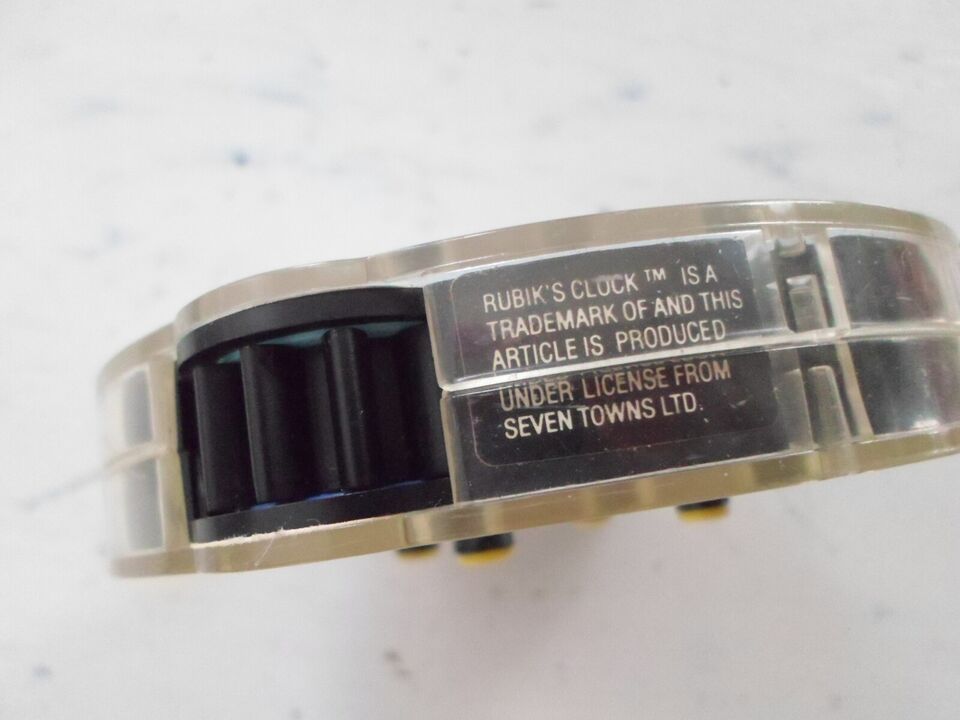 The Rubik’s Clock is a puzzle invented and patented in the 1980’s. The patent was purchased by Erno Rubik and marketed in 1988. It is arguably one of the simplest puzzles that is currently speedsolved in official WCA competitions and there has been quite a lot of discussion surrounding its future as an official event due to being completely different from all other twisty puzzle events currently hosted.

The first step is to hold the solved clock with all clocks facing up (it doesn’t matter which side you start on). Next, you look at the first scramble move, UL3-. This means that you push every pin down and push up only the upper-left pin. Then you use the + (clockwise) or – (anticlockwise) symbol to determine which direction you move the gear in. You must move the gear nearest to the pin that is pushed out (if there is more than one pin facing out, you need to use either of the gears nearest to those pins). In this case, you move the upper-left gear 3 “hours” anticlockwise.

The next move is U4-. If there is only one letter, then you push up both pins on that side of the puzzle, leaving the other two on the opposite end down. Therefore, with U this means that the two upper pins should be pushed out and the two bottom pins should not. And, same as above, the number and symbol indicate the number of “hours” and in which direction you should move the gear.

A little further into the scramble you will see ALL3+ and then y2. These should be fairly explanatory, for ALL you simply push all pins up and use any clock to move 3 “hours” clockwise. The y2 then simply means rotate the puzzle so that you’re now looking at the back and the 12 o’ clock indicators are still pointing upward 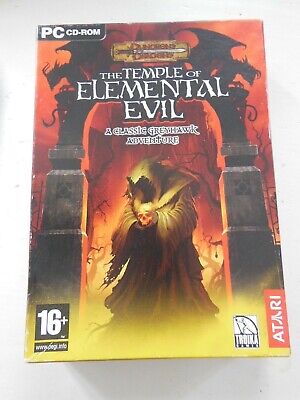 Dungeons & Dragons Temple of Elemental Evil, til pc, MMORPG, Flotte skiver. 2 disc med stor bog i old school pap æske. Ganske velholdt. Fragt 40kr GLS The Temple of Elemental Evil er et 2003-rolle videospil af Troika Games. Det er en udvidet udgave af det klassiske Dungeons & Dragons-eventyr The Temple of Elemental Evil som bruger master reglerne fra 3,5 udgaven. Et must for fans D & D eventyrerne. Four apocalyptic cults of Elemental Evil are building secret sanctuaries and outposts throughout the North, bringing terror and destruction to the Forgotten Realms. Each cult is devoted to one of the Princes of Elemental Evil (godlike entities embodying air, earth, fire, and water) and is led by a nihilistic prophet, corrupted by power. The cruel elf princess Aerisi Kalinoth speaks for the air Cult of the Howling Hatred, while Marlos Urnrayle, a fierce male medusa, leads the Cult of the Black Earth. The Cult of the Eternal Flame scars its followers at the behest of the beautiful and deadly tiefling Vanifer, and the mutilated sailor Gar Shatterkeel plots to drown the world with his Cult of the Crushing Wave. The cults use devastation orbs, forged of raw elemental power, to ravage Faerûn with horrifying earthquakes, typhoons, tornados, and other disasters. Independently, the cults are terrible adversaries, but now they have secretly begun transforming a long-lost dungeon into a huge subterranean temple dedicated to an alien entity known as the Elder Elemental Eye. To prevent this union of the Elemental Evils into one catastrophic force, heroes must expose the prophets’ true agenda. The cults’ agents are everywhere and their power is immense. When you don’t know whom to trust, knowledge is your only weapon. Unearth the Deception.
150 kr. 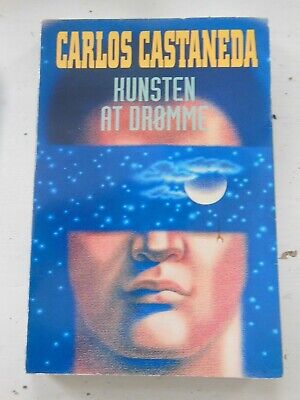 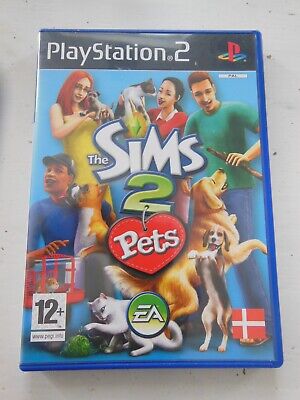